Much Ado About Don O’ Reilly

If you haven’t heard the recent news and outrage, I will keep it very brief.  After George Zimmerman’s acquittal, many in the black and brown communities begin to push for national conversations about race, racism, racial profiling and conditions in minority communities.  The large vocal right wing conservatives rebuffed and said, “Please don’t talk to us about race and injustice. Look at what you Negroes do to each other”.

Black pundits and white liberals shot back. “Gang violence in Chicago has nothing to do with institutionalized racism and a two tiered justice system. These issues need to be addressed. We need to have the conversation”.  Than one of the demigods of the right wing conservative tribe, Fox News’ Bill O’Reilly, boomed from his soapbox the commandments to solidify the conservative right wing’s position.

Paraphrasing his simplistic point of view on the topic; “Hey black community, you want to be treated better?  Black males start by pulling your pants up. Hey black women stop having all these babies out of wedlock. Hey Negros stop shooting and killing each other.  Stop listening to rap music. This is why whites and the police profile you. You are your own problems so stop blaming white people.  White people don’t have anything to do with any of your problems”.   He conveniently ignores the horrible past violence and institutionalized injustices that have crippled that blacks since emancipation by white society.

Days later, Don Lemon chimed in to give his black back up two cents. Paraphrasing; “Billy is right. Pull your pants up. Stop using the N-word, and stop popping babies out like a pez dispensers.” Both O’Reilly and Lemon were met with back lash from both black and white liberal.  Many felt that by agreeing with Bill, it enabled many in the white conservative and liberal groups to continue to do nothing and not speak out about inequalities in the legal system and disparities between whites and people of color in this country.

To be fair, these comments are nothing new and black society has been making these statements for years.  It doesn’t add any substance to the national conversation that supposedly was attempting to be made in the national race baiting media.  This is all a distraction from the incident that caused the discussion in the first place; Trayvon Martin’s death.

Trayvon Martin wasn’t shooting anyone in Chicago.  He was not born out of wedlock.   Wearing a hoodie with sagging pants should not be a death sentence in a supposedly democratic and free country. Being a black male shouldn’t equate “criminal” in the minds of our society.  All nationalities and racial groups commit violent crimes in our country.  A black male walking down the street shouldn’t look like you are “always getting away” with a crime as George Zimmerman said to the 9 1 1 operator the night he killed Martin.

Before and after the Zimmerman verdict you had these ridiculous PSAs in Florida begging (black) people not to riot.  These PSA’s were needed because the black population doesn’t have any self control after receiving bad news (sarcasm).  Media outlets, Conservative networks and websites were foaming at the mouth for violent unrest by blacks. Not understanding that expecting black and brown people to riot in and of itself was racist.  Then a small group of teens acted a fool in California after the Zimmerman verdict and it received national coverage.  “See I told you so” many of the Right leaning media outlets said.

Do you remember the Huntington Beach riot of 2013? Never heard of it?  Check out the pics below. Sunday July 28th 2013, fights and a subsequent riot broke out following the Vans U.S. Open of Surfing championship.  Yes white people were rioting after a surfing contest. It wasn’t the only time.  The first time whites rioted at Huntington Beach after a surfing contest was in 1986. They were rioting not over any type of perceived injustice in our court systems but simply just because.

The 2013 riot received very little coverage or mentions in the mainstream media outlets.  No breaking news coverage interrupting the normal breaking news coverage. Seven people were arrested including a white out duty fire fighter.   No white, I mean right wing conservative commentary about “what the white community needs to do is…stop surfing, stop skateboarding, pull your sagging skinny jean pant legs up and stop listening to rap music”. 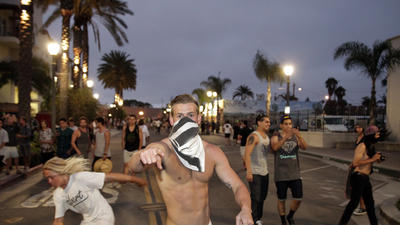 At some point we have to tune out the media and prevent media hungry pundits from hijacking the real conversations that need to be had in our country.  Until than we will never be able to properly heal and grow.

Octavius is the co-founder and editor of Cypher Avenue. He understands ten (10) years ago is a short-long time.

Where Is My Band Of Brothers?

Why Should I Support Black Businesses and the Black Community?

NO FEMS,  NO FATS,  NO SERVICE

Why Do “Straight” Black Men Like DaBaby Always Feel So Threatened By DaGays?

The Cypher Ave Fictional Series that Never Was